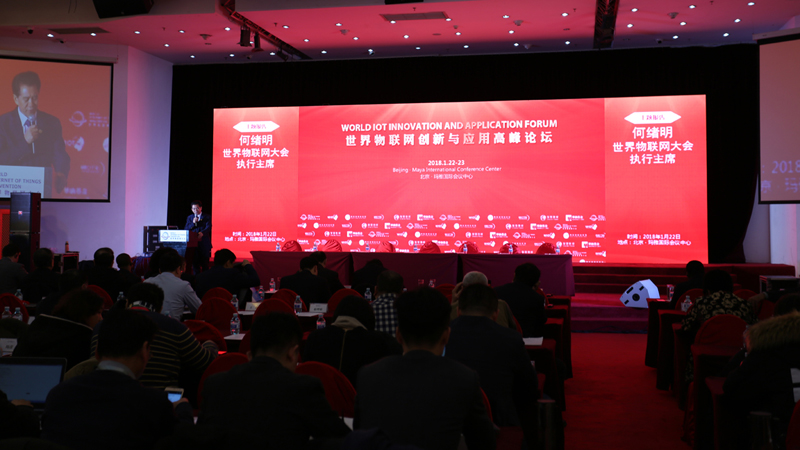 The World Internet of Things Innovation and Application Forum was held in Beijing, China on January 22, kicking off the year of the world Internet of things. Academicians at the Chinese Academy of Engineering, international experts and scholars, government representatives, and envoys, experts and scholars from more than 20 countries including France, Iran, Benin, Rwanda and the Philippines attended the forum. Enterprises on the World IoT Ranking List including Huawei, Bosch, SAP, CASIC, New H3C, China Unicom, Alibaba Cloud, China Mobile, Fujitsu, XCMG and Haier, and representatives of standard organizations including ISO, IEEE, UL, BSI, SESEC and GS1 China attended the forum and delivered speeches. The President of the European Commission Jean-Claude Juncker expressed his best wishes for a successful event. The World Internet of Things Conference Cultural and Educational Industry Center and the Preparatory Group of the Committee of the World IOT Standard Working Organization were established. 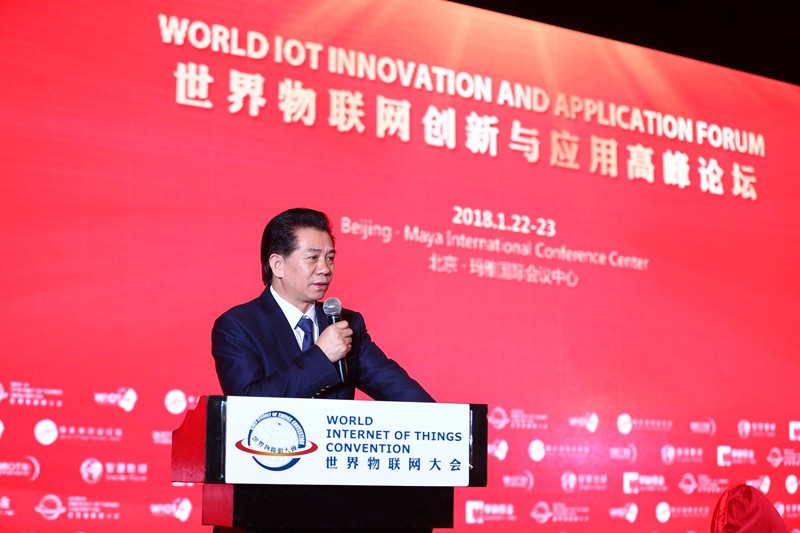 He Xuming, executive chairman of the World Internet of Things Convention, gives a speech

He Xuming, executive chairman of the WIOTC, said: " the year of 2018 is the first year of the World Internet of Things and the starting year for the explosive growth of the powerful countries such as China, Germany, France, the United States, Russia, Japan and other IoT countries. In the new era of IoT, creating new IoT products and technologies, forming a new IoT strategy and opening up a new era of 'Wisdom Revolution' with the new thinking of IoT, is our goal of this forum.” He elaborated on the innovative concept that “IoT will represent the ‘wisdom revolution’" and the innovation and application of the cognition of IoT architecture system. Then he talked about establishing the World IoT Standard Working Organization and building a World IoT standard institute, thus promoting the sustainable development of IoT industry and practicing building a community of shared future for mankind. 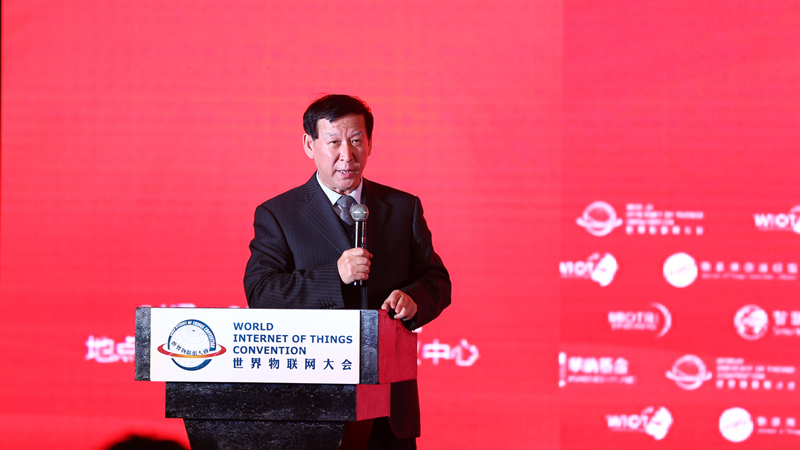 Yu Hongjun, former vice minister of the International Department of Central Committee of CPC, pointed out in his speech that China is leading the way in the innovation and application of IoT. The global economy grows by 3.6% in 2017, China's GDP growth exceeds 6.5 per cent last year, reaching 6.9 per cent, and the dawn of world economic growth is now emerging.

According to Yu, through the platform of WIOTC, we can share the development experience and information of IoT in China, integrate the innovative application of IoT into "the Belt and Road" and help push forward the "community of shared future for mankind". At last, he congratulated this forum for achieving the expected results. 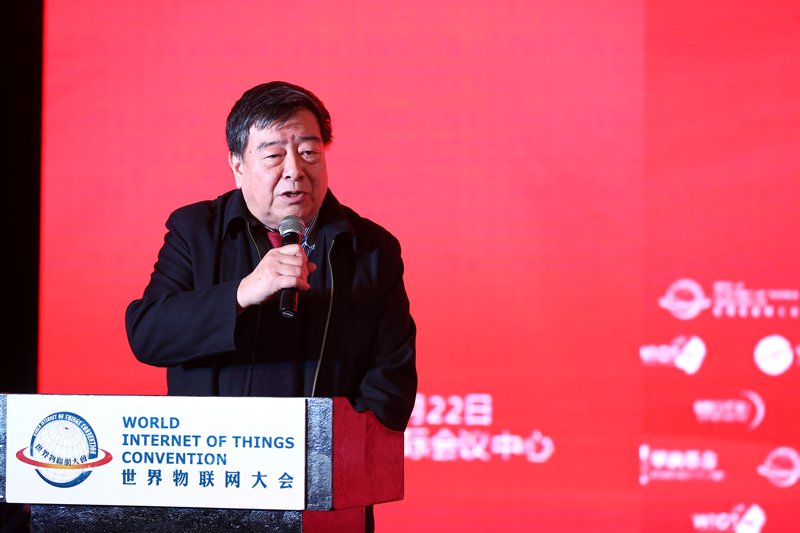 Shi Dinghuan, former Counselor of the Counsellors' Office of the State Council and former Secretary-General of the Ministry of Science and Technology of the PRC., makes a speech

Shi Dinghuan, former secretary-general of the Ministry of Science and Technology of the PRC., believes that China has entered a new era of distinctive socialism, the green development and the wisdom development have become important directions for our future development. The central government attaches great importance to the development of information technology and the integration of the new generation of advanced manufacturing computer technology and the real economy. The demonstration experience of IoT applications has blossomed globally and enterprises have also strengthened the mutual exchanges and cooperation between countries while expanding the international market. It is hoped that WIOTC will contribute to achieving the UN SDGs 2030, the Two Centenary Goals of China and the "Chinese Dream" in the tide of new world economy. 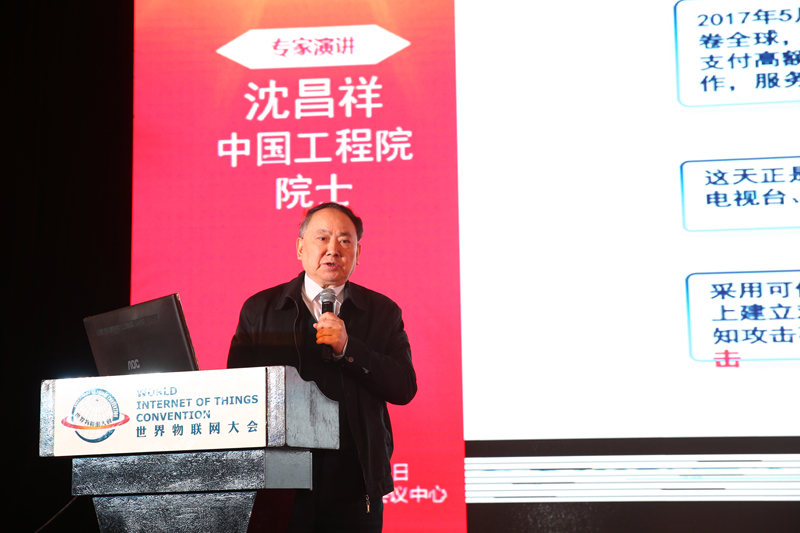 Shen Changxiang, academician of the Chinese Academy of Engineering, makes a keynote lecture

Shen Changxiang, academician of the Chinese Academy of Engineering pointed out in his lecture that it is natural to construct IoT security with trusted computing, which includes three domains: the perception domain, the application domain and the processing domain. Through gateway, there is a secure boundary, through network communication security, then to the processing domain (with preprocessing), so that a safe and reliable IoT can be formed. He stressed that the lack of a secure IoT is not sustainable development and demonstrated the IoT security architecture. “I hope we can build a secure network system through WIOTC”, Shen added. 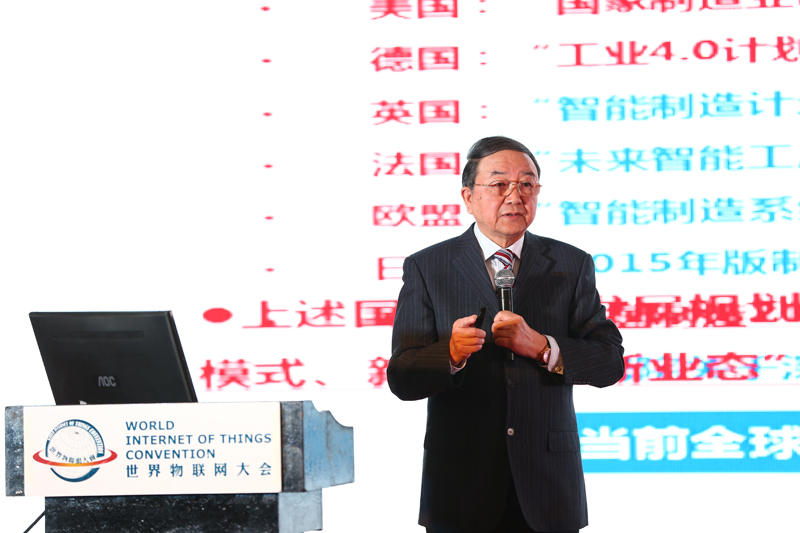 Li Bohu, academician of the Chinese Academy of Engineering, makes a keynote lecture

Li Bohu, academician of the Chinese Academy of Engineering, makes a keynote lecture “To Develop Technology, Industry and Application of Intelligent Manufacturing Led by New-generation Artificial Intelligence Technology”. He pointed out that a new technological revolution, a new industrial revolution is being carried out globally, that is, the IoT artificial intelligence. Characteristics can be described as: emergence of intuitive perception capability of deep reinforcement learning as driven by data; birth of network-based swarm intelligence; hybrid intelligence oriented by interaction technology of man-machine and brain-machine; flourishing of cross-media reasoning and autonomous smart unmanned system.

“In-depth integration of innovation-driven and industrialization, and the development and application of intelligent manufacturing led by new-generation artificial intelligence technology call for global cooperation and exchange, and WIOTC is a quite good platform”, Li added. 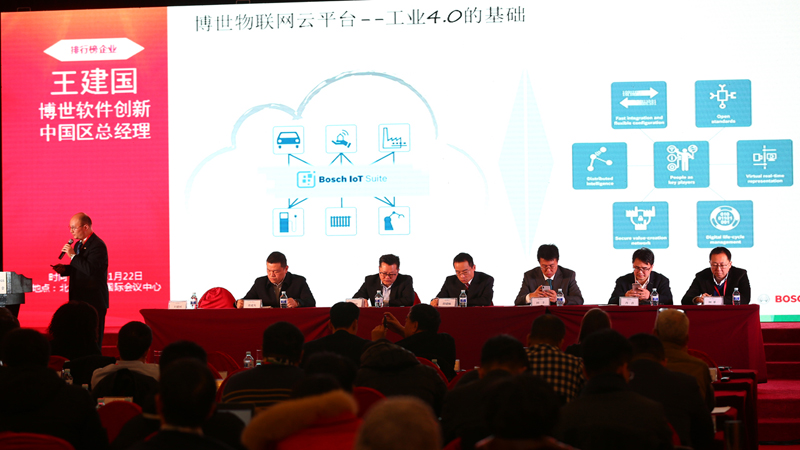 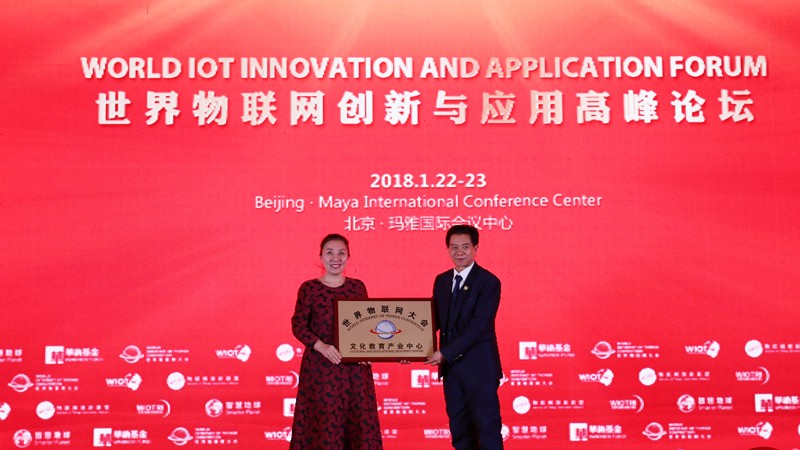 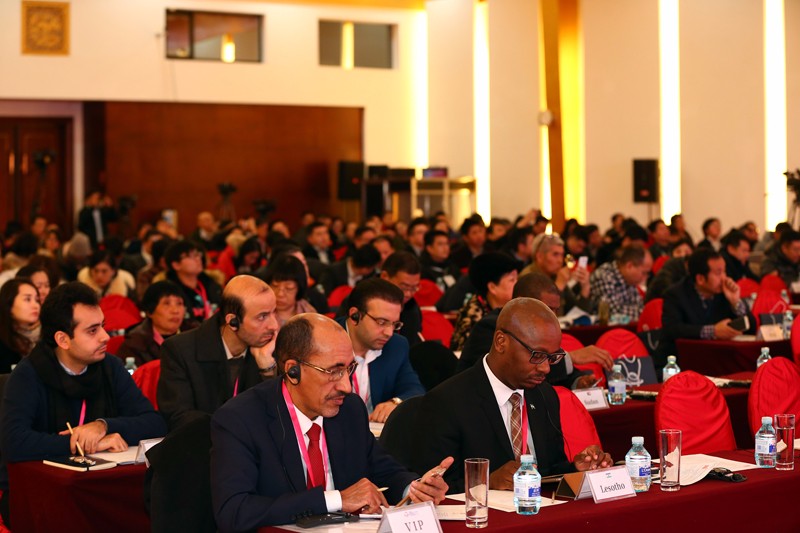 In the thematic forum of Industrial IoT, Kevin Pang, head of Strategic Engagement in China of GSMA; Liu Mo, director of The Research Institute of Informatization and Industrialization Integration of China Academy of Information and Communications Technology; Zhang Qiliang, founder and general manager of Jiangsu XCMG information and technology co., LTD. and Yu Hongzhou, IoT solution director of the New H3C Group respectively delivered speeches on “Move towards the intelligent connection of all things”, “The development and Prospect of industrial Internet”,” Industrial internet is endowed with new intelligent manufacture” and “Oasis Platform boosts the development of IoT”.

In the thematic forum of Smart City, Thomas Zhao, CMO of Beijing Canny Unisrobo Technology Co., Ltd.; Shi Shenxiang, executive director of the Earth shell Robot Science and Technology Ltd.; Rose PAN, chief standard expert for Information Security & Data Management of the BSI APAC; Wang Miao, director of standard and patent department in Haier U+ and Zhou Yicheng, project leader of ISO 37153, senior manager of the FUJITSU Limited respectively gave speeches on “The unity of robot application scenario revolution”, “The application of artificial intelligence in the robot scene”, “Data Governance in the era of IoT”, “Interconnection Standard of Smart Home in IOT Era” and “IoT and its Applications for Smart Cities”. 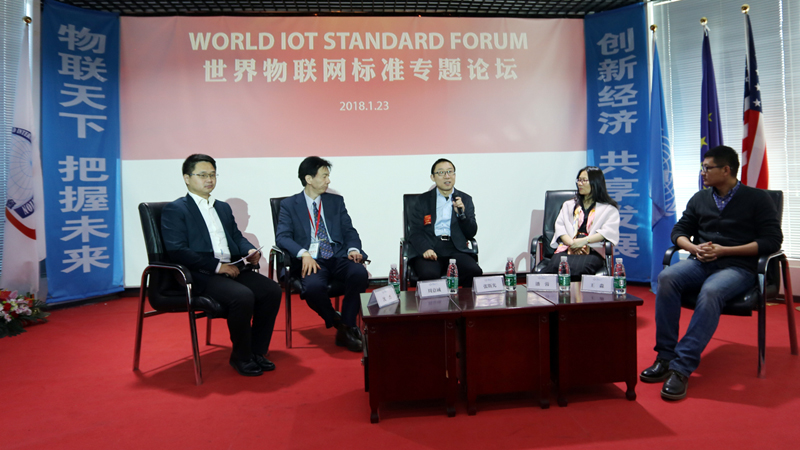 Dr. Shen presided over the World IoT Standard high-end dialogue, Zhou Yicheng, project leader of ISO 37153, senior manager of Fujitsu; Zhang Siguang, chief representative for China, UL; Rose Pan, chief standard expert for Information Security & Data Management of the BSI APAC; Wang Miao, director of standard and patent department in Haier U+, took part in the dialogue and seriously debated and discussed issues such as how to promote the construction of the World IoT standard, the problems and suggestions facing the standard promotion, and the key role of the standard. According to them, standard bodies should form standards based on the new cognition of IoT, rather than everyone goes his own way. It is recommended and hoped that WIOTC can serve as a platform for discussion and work together. They all agreed that all standards in the future are all for human services. Standard testing and certification are important motivators for the standard construction. At the same time it is also proposed to set standards with an open mind and take market demand into account. 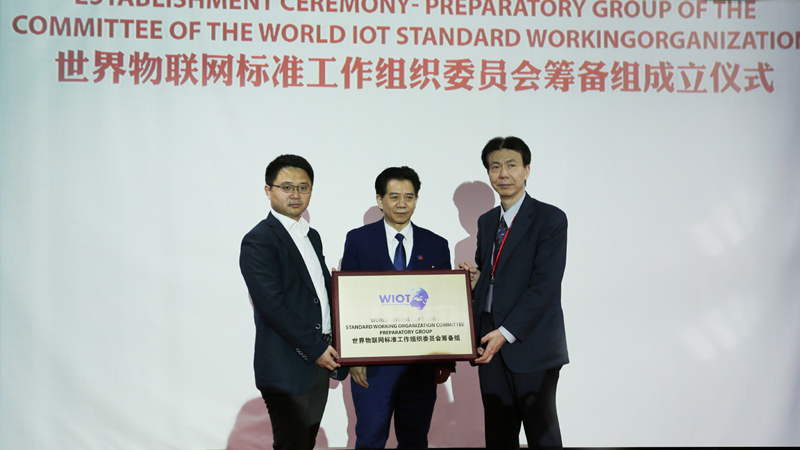 The forum has been supported by all walks of life, dozens of IoT leading enterprises showed the new technologies, new products, new solutions and development planning, made good suggestions on innovative application and standard organizations, showed the strength of the world's top enterprises, and brought the "first shot" for the outbreak in 2018. The World IoT Innovation and Application Forum came to an end in a warm applause with the establishment of the preparatory group of the Committee of the World IOT Standard Working Organization.