The press conference of the 2019 World Internet of Things Convention, co-sponsored by the China Information Industry Association (CIIA), World Internet of Things Convention (WIOTC) and Diplomatic Council, was held in Beijing on August 22. The 2019 World Internet of Things Convention, a global event of great concern and expectation, will open in November in Beijing, China. He Xuming, Chairman of the WIOTC, Tang Yuan, former Director of the Research Office of the State Council, Andreas Dripke, Global Chairman of the Diplomatic Council, Liu Yanhua, Deputy Secretary-General of the CIIA, and Jie Zhonghai, CTO of the Intelligent Connection of FAW BESTUNE Development Institute, and representatives of local governments made speeches respectively. Nearly 200 representatives of diplomatic envoys, well-known enterprises, local governments, experts and media from Europe and Asia attended the meeting. The preparatory situation and plan of the 2019 WIOTC were released at the meeting. Participants witnessed the signing of a number of local government projects to jointly build 100 billion IoT demonstration parks and the signing ceremony of ecological partnership.  The 2019 World IoT Ranking List Top 500 selection criteria and the presidium were also announced, and representative companies listed on the 2018 World IoT Ranking List were issued certificates. BESTUNE will be the designated vehicle for the 2019 WIOTC and was awarded a certificate of honor. The IoT Connection Operating System Institute of World IoT Research Institute was established and the ceremony was held. The vice chairman of the WIOTC and the spokesperson Liang Zi presided over the press conference. 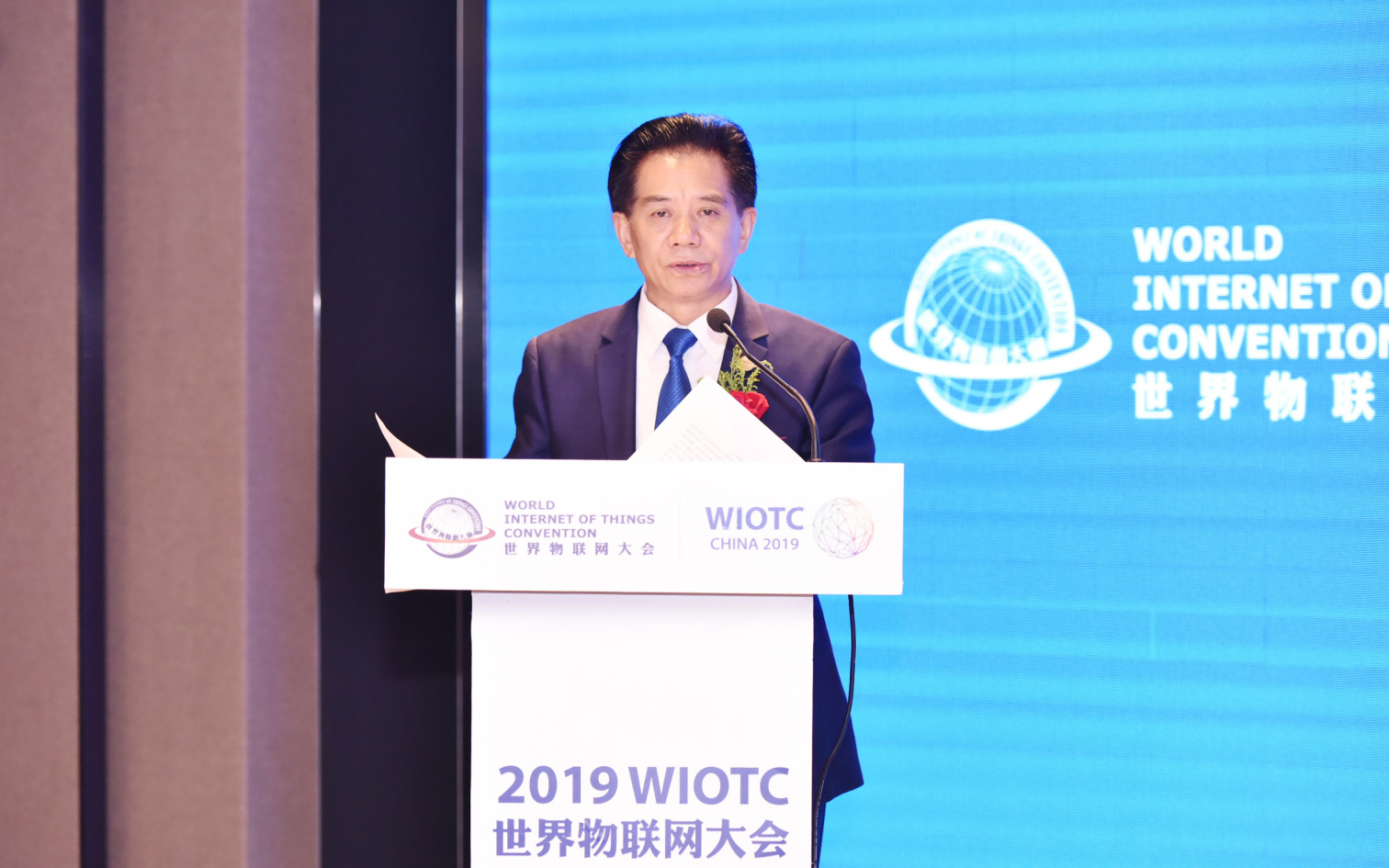 In his speech, WIOTC Chairman He Xuming reviewed the previous conferences and summits held with the support and attention of organizations such as UNESCO and ITU, international organizations such as ISO and IEEE, and enterprises such as Huawei, SAP and Bosch. He innovated the world's cognitive height and theoretical foundation for the IoT, compiled and published the world's first "World IoT White Paper" and Declaration, and established the world's largest and most influential "World IoT Ranking List Top 500”. These have received extensive attention, recognition and participation from organizations including UN agencies, multinational government agencies, international society, enterprises, and business associations. This year's convention will be a great event to open the 5G IoT era. It plans to launch the World IoT Connection Operating System, and a number of international IoT new economic demonstration zones and other projects.

Tang Yuan, former Director of the Research Office of the State Council, said in his speech that the WIOTC is a global event, and the new concept, architecture, model, and theoretical guidance for the IoT have been recorded and published at the Development Research Center of the State Council, the Chinese Academy of Engineering, the Chinese Academy of Sciences, Qiushi Journal, and the economic internal reference. Thousands of media in the world have reported and reprinted it. WIOTC has become a veritable international organization of the IoT, and has played a leading role in the development of the IoT industry. We have to be involved and support.

Liu Yanhua, Deputy Secretary-General of the CIIA, and Andreas Dripke, Global Chairman of the Diplomatic Council addressed respectively on behalf of the co-sponsor, saying that they would mobilize relevant resources to run the 2019 WIOTC, open up new economic models, and provide multi-faceted support. 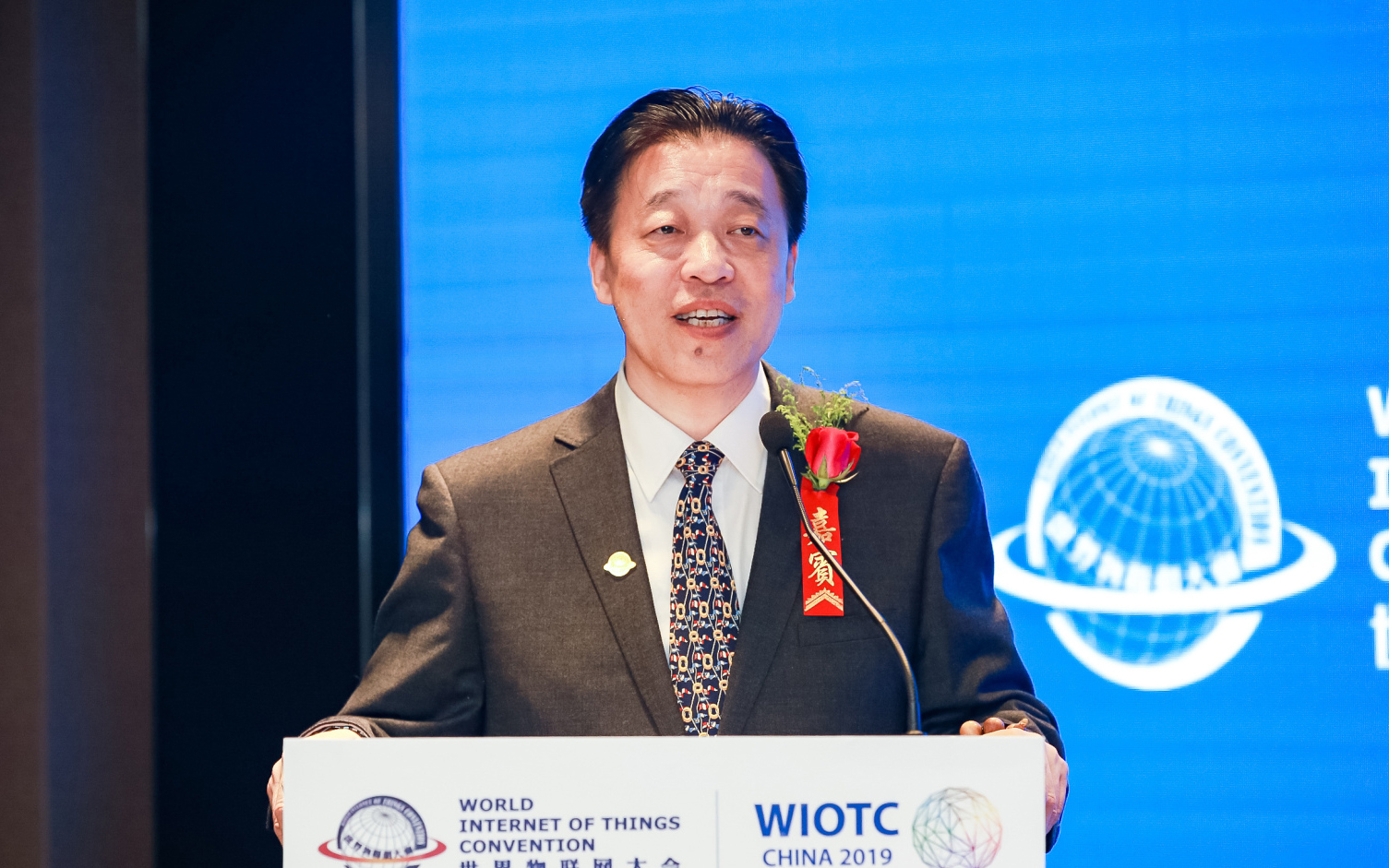 Zhang Hua, Vice Chairman of the WIOTC, unveiled the plan for the 2019 WIOTC, and introduced the organization and key points of the convention. He Xuming, the Chairman of the WIOTC, Vice Chairman Zhang Hua, Su Tao, and the Executive Secretary He Qiang attended the question-answering session and released the highlights, time, etc. Themed "Promoting the 5G IoT World, Creating a Global Smart Economy", discussions, explorations, exchanges and collisions will be held around it. This year's convention will consist of the opening ceremony, theme forum, high-end dialogue, local government session, enterprise session, thematic forum (It covers more than 10 fields, including industrial manufacturing, artificial intelligence, health care, smart agriculture, environmental protection and energy, smart car, smart logistics, etc.) and closed meetings. Thousands of people from UN agencies, international organizations, business associations, IoT experts and scholars, well-known IoT companies and government representatives will be invited to participate in various forums. It will clarify the important turning point of the world IoT from concept, exploration and experiment to the development of industrial economic market. The key to this new starting point is 5G. Welcome to participate in the 2019 WIOTC to share the new economic opportunities of the 5G IoT, which aims to lead the economic development of the global IoT industry, benefit the public's intelligent life and work, and practice the community of shared future for mankind. 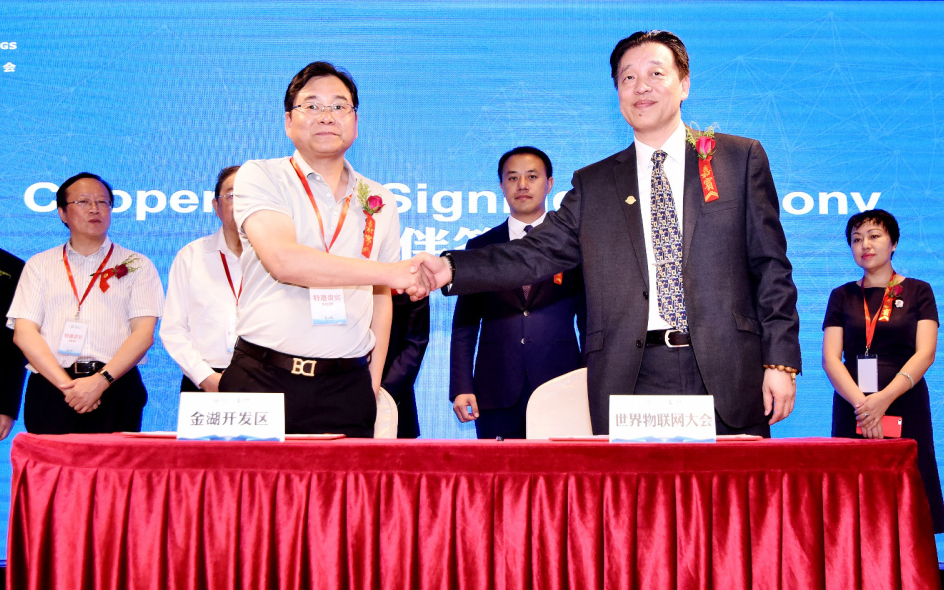 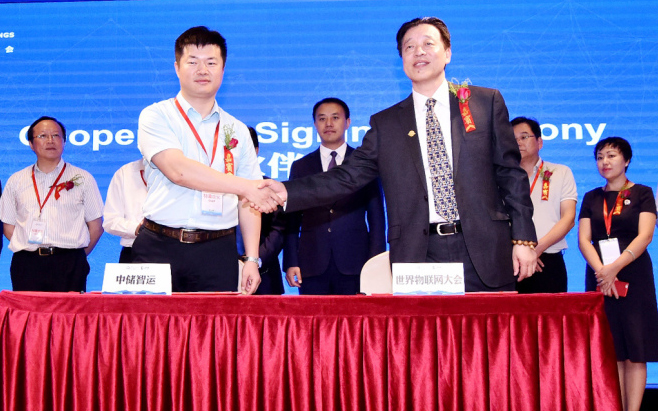 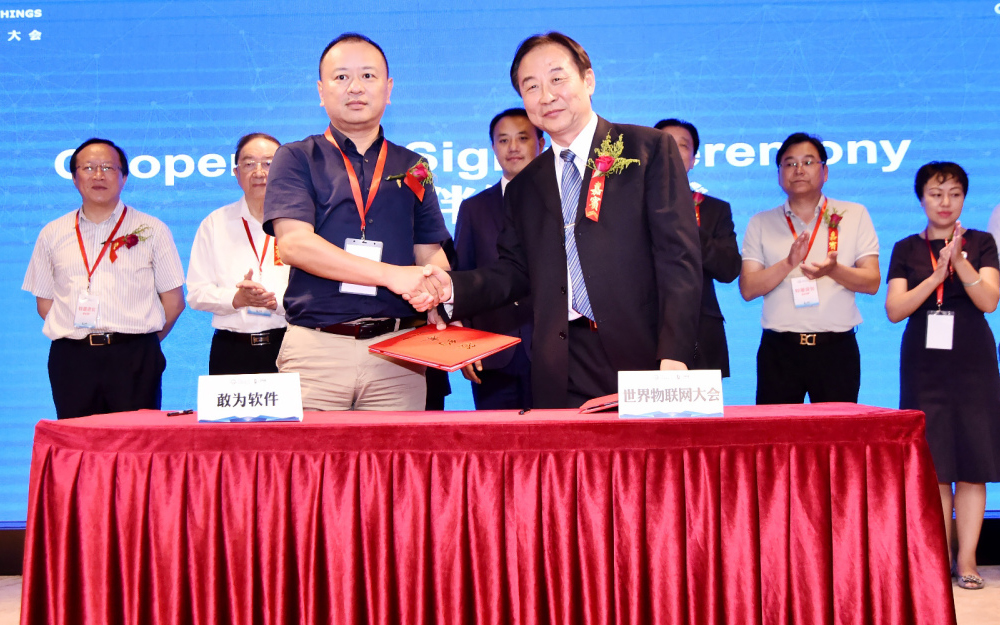 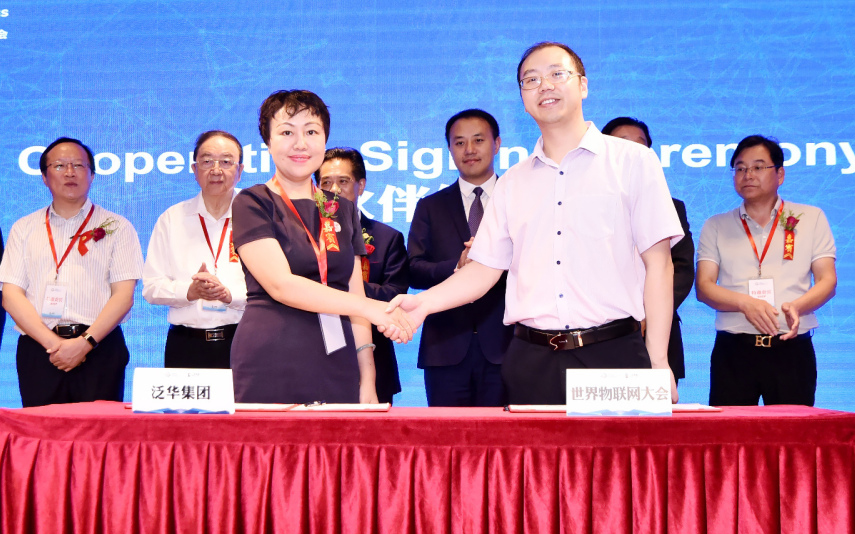 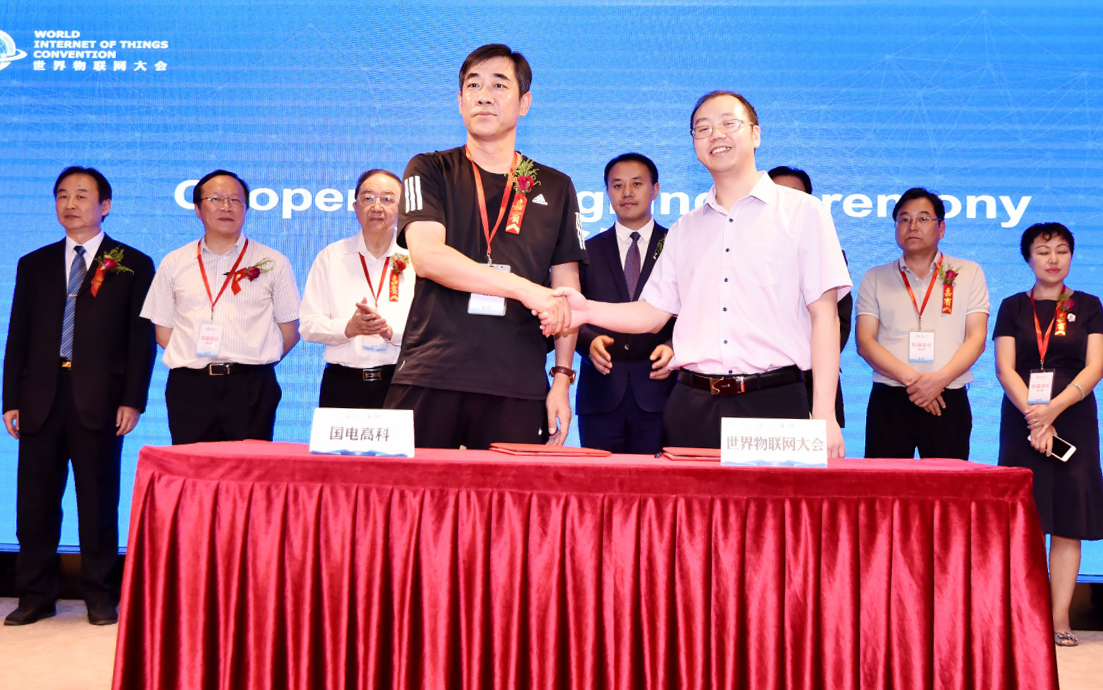 Mr. Zhao Dong, Deputy General Manager of FAW Car Sales Company, Ltd., on behalf of FAW Car Co., Ltd, accepted the honorary title of “Official Designated Vehicle for 2019 World Internet of Things Convention” awarded by He Xuming, Chairman of the WIOTC and Chairman of the World IoT Foundation. The meeting announced that the Connection Operating System Research Institute of World IoT Research Institute was established and the ceremony was held.

CTO of the Intelligent Connection of FAW BESTUNE Development Institute and other representatives at the conference expressed their support to the WIOTC, and would make due contributions to the IoT to benefit intelligent life.

Su Tao, Vice Chairman of the WIOTC, released the ranking criteria of 2019 World IoT Ranking List Top 500, and announced the presidium members composed of judges from more than 30 countries around the world. The final results will be announced through the WIOTC official website and media. During the press conference, WIOTC issued certificates of 2018 World IoT Ranking List for representatives of enterprises.

The press conference ended with the rousing song of WIOTC.

Next: 【China Daily】2019 World Internet of Things Convention in Beijing slated for November